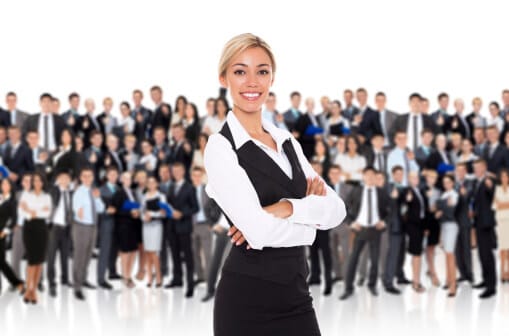 07/25/2014 • by Bill Sheridan
Want your business to thrive? Let a woman lead the way
If there’s a woman at or near the top of your org chart, your business is probably booming. There’s nothing new there. A boatload of studies in recent years have hinted that businesses with women helping to call the shots outperform their competition by significant margins. A new study out of Canada, however, finds that … Continued

If there’s a woman at or near the top of your org chart, your business is probably booming.

There’s nothing new there. A boatload of studies in recent years have hinted that businesses with women helping to call the shots outperform their competition by significant margins.

A new study out of Canada, however, finds that even a single woman sitting among a sea of male leaders helps boost a business’s bottom line.

“Corporate boards with greater gender diversity function better, and it takes just one woman to make a difference. While earlier research suggested that it takes a few women in the boardroom to move the needle, a new study shows that even the presence of a single female board member has a positive impact, especially in male-dominated industries.

“‘There’s been this number out there that you need three women on the board to make a difference. What I find is you don’t need three,’ said Judy Zaichkowsky, marketing professor at Simon Fraser University in Vancouver, Canada, and author of the new research. ‘The idea that you need to have this big critical mass is not shown out in the data.’”

The only surprising thing about this research is that anyone might find it surprising. Business thrives under diverse thought and leadership.

“The advantages of embracing diversity are immediate and tangible,” John Hunt writes in the beautiful and eloquent The Art of the Idea. “Minds automatically open as they adjust to absorb new stimuli. Working with people of different backgrounds doesn’t just give the group a different point of view, it makes you reassess your own. … We need to take our blinders off, mainly because we don’t realize we’re wearing any.”

Which brings us to the CPA profession.

According to the AICPA, over the past two decades women have accounted for 50 percent of all new CPAs. But only 19 percent of partners in CPA firms nationwide are women, and among executive officers in business and industry, that number falls to just over 14 percent.

The bottom line: Women are woefully under-represented in leadership positions throughout the profession.

“We’re stuck,” Lisa Cines, managing partner of the Rockville, Md., office of Dixon Hughes Goodman, said in a recent article in The Statement. “We’re living in the past. We have not been successful yet in making that transformation to a truly diverse profession from a gender or ethnic perspective.”

The benefits of diverse leadership are obvious, but with the exception of progressive pockets here and there, Cines believes the profession lags far behind the top performers in corporate America.

“Progress is being made, but it is so negligible that it is concerning for the profession overall,” said Cines. “Firms now understand that the numbers are unacceptable, but they have not solved for or truly acknowledged all of the unconscious bias that occurs every day. For every few steps forward, there appear to be others that go back.”

So what does the profession need to do? How do we promote diversity in a diversity-adverse profession?

The AICPA has launched its Women’s Initiatives Executive Committee, which is “committed to the retention and advancement of women in accounting.” The MACPA is an active supporter of the committee’s work, and the MACPA’s Board of Directors has created a Women’s and Diversity Initiatives Task Force to study the issues surrounding diversity in the profession and to “(c)reate a network of resources and relationships that enable and empower a diverse profession. The ultimate goal is to “deliver valuable programs, a breadth of perspectives, engaged participation, program growth, and changed thinking.”

Keep an eye on our blog for details as they become available.

The MACPA’s task force coincides with AICPA efforts to promote a more diverse profession. The latest initiative is an e-newsletter for AICPA members called “Inclusion Solutions” that centers on news and resources that promote diversity in the workplace. Sign up to receive the newsletter here.

That’s all well and good, but this goes beyond mere awareness and education. Real, tangible results are the ultimate goal. When CPA firms and finance departments everywhere start providing women with clear career paths, mentorships, and real opportunities to advance and lead, then we’ll start to breathe easier.

Until that happens, awareness is what we’ve got. Read our Statement article in its entirety, then tell us: What else should the profession do to promote diversity throughout its ranks?