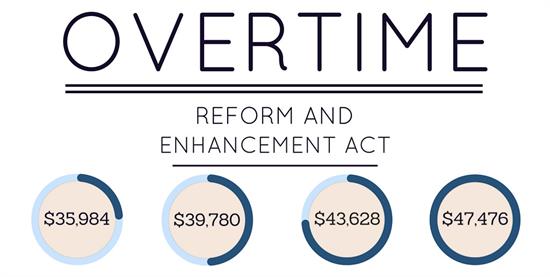 09/07/2016 • by Edith Orenstein
Support grows for phasing in DOL overtime rule
The Maryland Association of CPAs continues to work to soften the blow of the Department of Labor’s overtime rule issued earlier this year, set to take effect on Dec. 1. The MACPA has joined the AICPA and other organizations in voicing support for H.R. 5813, the Overtime Reform and Enhancement Act (OREA), to provide a three-year phase-in … Continued 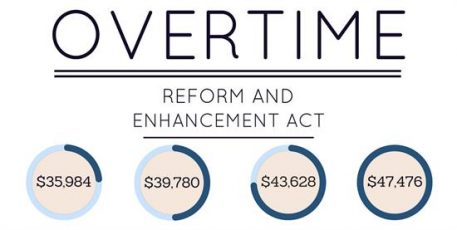 The Maryland Association of CPAs continues to work to soften the blow of the Department of Labor’s overtime rule issued earlier this year, set to take effect on Dec. 1.

The MACPA has joined the AICPA and other organizations in voicing support for H.R. 5813, the Overtime Reform and Enhancement Act (OREA), to provide a three-year phase-in of the rule.

Impact of DOL overtime rule change
The rule, announced by the DOL in May, significantly increases the salary threshold level below which employees working overtime would be entitled to paid overtime. The rule would double the current threshold of $23,660 to $47,476, meaning employees earning less than $47,476 will now be required to be paid for overtime worked.

The DOL’s overtime rule will not only increase the cost burden in terms of total compensation expense borne by businesses, but would also increase the costs associated with system changes and related internal controls, to ensure accurate information collection and reporting to comply with the new rule.

CPA firms that traditionally rely on a large component of their labor force working overtime during busy season are likely to be significantly impacted by the new rule, as will their clients in business and industry.

MACPA, AICPA support HR 5813 to phase in OT rule
The MACPA has been actively engaged in exploring ways to make the rule less disruptive to businesses here and throughout the nation. Earlier this year, MACPA leaders met with the Office of Management and Budget to warn of the significant unintended consequences of the rule.

The MACPA has continued its advocacy action by sending letters of support of OREA, which is sponsored by U.S. Rep. Kurt Schrader (D-Ore.). The MACPA asked congressional delegation members to co-sponsor the bill to provide regulatory relief to firms and their employees in Maryland.

H.R. 5813 would absorb some of the compliance burden placed on employers and their employees by implementing a framework for gradual increases. The measure would build up to the full threshold envisioned by the DOL in December of 2019, providing three full years for firms and companies to better plan how to absorb the increase. Additionally, H.R. 5813 would eliminate the automatic update provision of the overtime rule, preventing DOL from setting a new salary threshold without public input.

“We applaud the effort to make the overtime rule more reasonable,” said MACPA Executive Director Tom Hood. “Phasing in the changes will allow businesses to more easily absorb the impact. It would be far less disruptive to the way they operate and their employees are paid. I encourage MACPA members to express their support for H.R. 5813 when they communicate with their member of congress. The time to act is now.”

OREA has the backing of nearly 100 organizations, including the American Institute of CPAs and the American Society of Association Executives,

Another supporter of the bill, the Society for Human Resource Management, reports, “As Congress Returns for One Big Push Before the Elections, Uncertain an Overtime Fix Will Be in the Mix.” That is why, as noted by the MACPA’s Hood, “the time to act is now.”

Updates on the DOL rule will be provided at the MACPA’s fall 2016 professional issues updates, held throughout Maryland. The MACPA continues to lead the way for its members in audit, tax, business and industry on important federal and state legislative issues.

Hold the date for CPA Day in Annapolis, when MACPA members will meet with their elected representatives on Jan. 26.