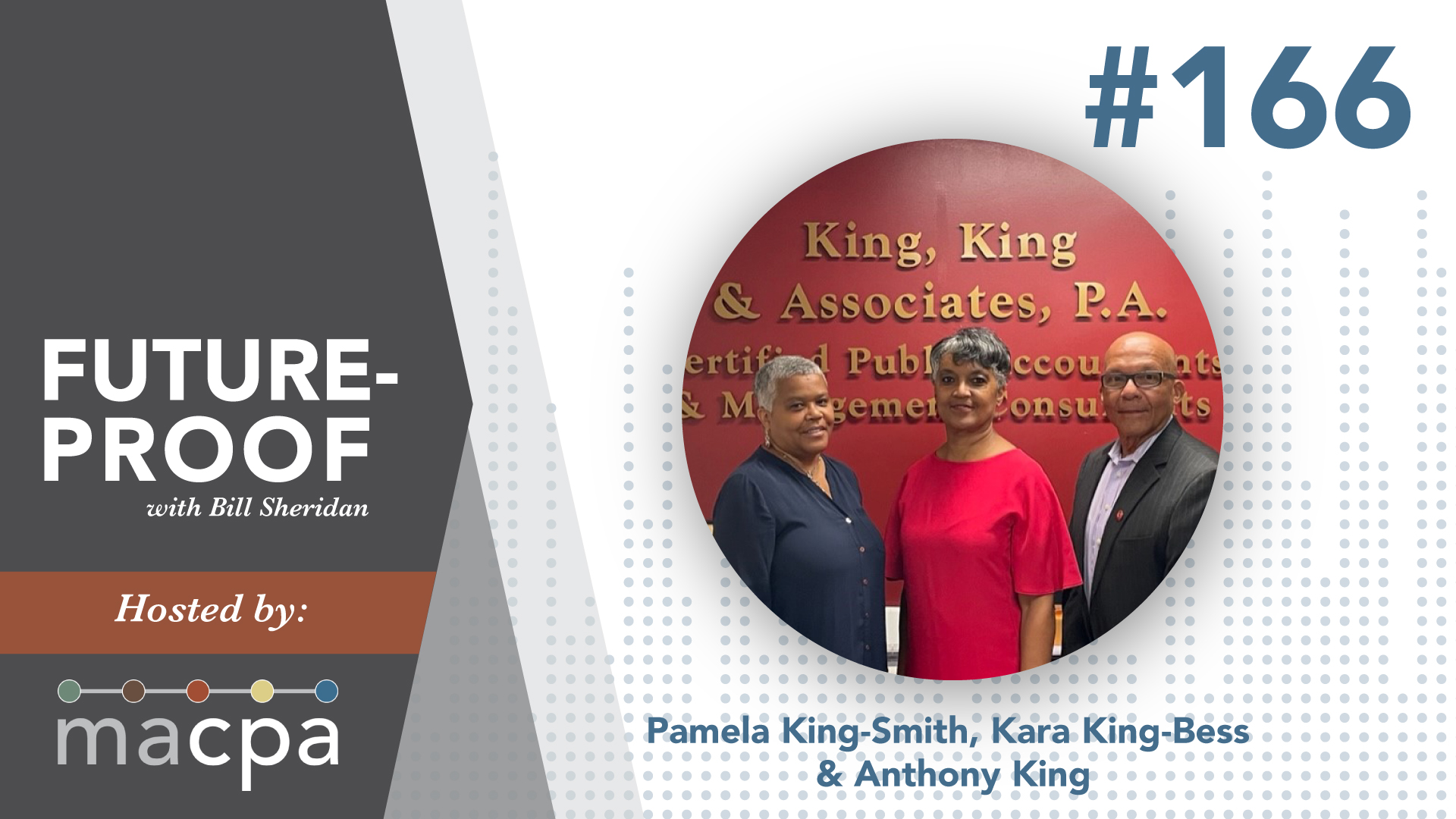 02/02/2022 • by Bill Sheridan
Podcast: Remembering Maryland’s first Black CPA
In celebration of Black History Month, I reached out recently to the folks at King, King & Associates, and here’s why: The Baltimore firm is run by the children of Maryland’s first Black CPA. His name is Benjamin King Sr., and if you don’t know much about him … well, you should. This comes straight … Continued

In celebration of Black History Month, I reached out recently to the folks at King, King & Associates, and here’s why: The Baltimore firm is run by the children of Maryland’s first Black CPA.

His name is Benjamin King Sr., and if you don’t know much about him … well, you should. This comes straight from the MACPA’s history book, which was published in 2001 in celebration of the association’s 100th anniversary.

King became the first African-American CPA in the state of Maryland and only the 45th in the United States in 1957. One of four children, he grew up in Washington D.C. and graduated from Dunbar High School. After graduating from Virginia State University in 1950, King served the U.S. Army in the Korean War until 1952. He tried to get a job as an Army auditor but was told he was unqualified — an answer he unfortunately heard all too frequently. Eventually, he was hired as an auditor with the U.S. Army Audit Agency.

He was still determined to become a CPA, however, so he enrolled at American University through the G.I. Bill program. And this passage comes straight from the MACPA history book. It reads, quote:

“King frequently applied for jobs in accounting while studying at American University. He was always rejected after the potential employer learned that he was African-American. These rejections prevented him from meeting the two-year experience requirement to take the CPA Examination in Washington, D.C. To obtain the required experience, people suggested that he get a job with the federal government in Virginia or move to another state and work for a Black CPA firm.

“If King had chosen to get a job with the federal government in Virginia, he would have had to work for four years to qualify to sit for the examination in Virginia. Moving to another state to work for a Black CPA firm would have required him to move hundreds of miles away, possibly to Michigan, Illinois, or New York. King looked for other alternatives and learned that Maryland did not have an experience requirement. King’s accounting courses at American University qualified him to sit for the examination. He still needed to satisfy the residency requirement. To meet this requirement, he moved to Maryland and lived with his uncle. He became a Maryland CPA in 1957. He joined the Maryland Association of CPAs in 1958; one of his professors from American University paid his member dues.”

From there, he started his own firm, Benjamin King CPA, in 1957, serving mainly Black-owned businesses. The firm grew, and in 1958 he entered a partnership with Arthur Reynolds Sr. and the firm became King, Reynolds and Company.

Another of his passions was helping young professionals make their way into the profession. He served on the faculty and Morgan State University and had a profound impact on his students. One student, Roman Henderson Pearson — who would go on to become auditor general for the state of Michigan and a member of Michigan’s State Board of Accountancy, had this to say about Benjamin King:

“You made the idea of being an accountant achievable in my mind. You made the whole notion of being on a state licensing board achievable in my mind. You planted these ideas. I made my decision fall right in line with these ideas that the power of your words planted on my mind at the age of 19. You have been a wonderful shepherd, and your flock has been super productive!”

Another student, Allen Boston, who would go on to become a partner and national director of Minority Recruitment at Ernst & Young LLP, describes King’s impact this way:

“Without exaggeration,” the MACPA’s history book states, “King can be viewed as the father of African-American CPAs in Maryland.”

And that alone would be a hell of a legacy. But here’s the thing: He was the father of five children, four of whom are now CPAs — three of whom now work for the Baltimore firm that he founded.

And those three CPAs are my guests this week. They are Pamela King-Smith, Kara King-Bess, and Anthony King. Pamela is the firm’s president and administrative and tax principal, Kara is the firm’s audit principal and vice president, and Tony directs the firm’s business advisory and consulting practice and is also responsible for the firm’s IT and management advisory engagements.

I was so happy to sit down and talk with them about their father’s legacy, his place in the history of our profession, where this profession stands now in terms of diversity and inclusion, versus where we were when their father founded the firm, and — with a hat-tip to their father’s passion for young professionals — their advice for students who are just now preparing to enter the profession and leave their own marks, just as Benjamin King did.

Listen to our conversation here.

Future-Proof is a production of Crate Media.