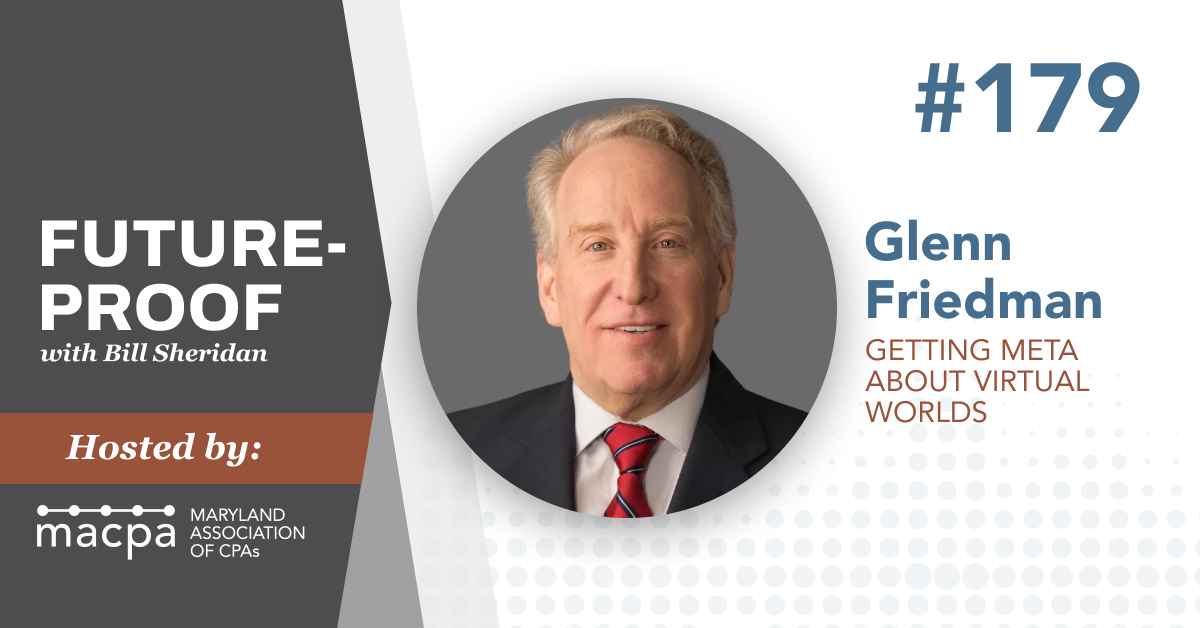 09/26/2022 • by Bill Sheridan
Podcast: Getting meta about virtual worlds
On this week’s show we talk all things metaverse with our guest, Glenn Friedman, CEO of Prager Metis, a global CPA firm headquartered in New York. Prager Metis made headlines earlier this year by becoming one of the first accounting firms to set up shop in the metaverse — kind of loosely defined as a … Continued

On this week’s show we talk all things metaverse with our guest, Glenn Friedman, CEO of Prager Metis, a global CPA firm headquartered in New York.

Prager Metis made headlines earlier this year by becoming one of the first accounting firms to set up shop in the metaverse — kind of loosely defined as a new iteration of the Internet. It’s a virtual world, basically, running in parallel to the real, physical world. You can create a virtual avatar of  yourself and interact with the avatars of other folks from anywhere throughout the world, all gathered in a virtual space to do … almost anything. Business, learning, networking, entertainment, commerce — all of this stuff is happening in this virtual space.

But let’s start by going back about 15 years or so. A virtual world called Second Life was all the rage. Remember Second Life? It’s still around actually — these days calling itself an “inclusive haven of self-expression,” whatever that means. But back in 2007, 2008, everyone was wondering, “What is this virtual world? And what does it mean for what we’re doing in our real world?”

A Maryland accounting firm known as KAWG&F — known as KatzAbosch today — decided to find out. They created what we believe was the first virtual CPA firm in Second Life. Their IT director at the time was a guy named Byron Patrick, who would go on to chair the Maryland Association of CPAs’ Board of Directors. “We realized there is a real economy growing in Second Life,” Patrick said at the time, “and every good economy needs CPAs, so we figured we needed to be there, too.”

The team at the MACPA started paying attention, too. We believed Second Life had a lot of potential to provide continuing education to a wider audience in that virtual space, so we set up shop in Second Life, too. We created what we called CPA Island, a virtual island that included space not only for our association, but also for training, as well as for young professionals, educators, other accounting firms and organizations that wanted to get started in the virtual space. It was designed to be a foothold for the profession in the virtual world.

The results were … mixed.

The potential was huge, no doubt about it. If everything’s working right, I don’t think anyone would deny that virtual worlds like Second Life have the potential to bring people together from throughout the world to do some really interesting and innovative things. And some of what we did worked really well. We provided CPE-qualifying events in Second Life, held networking events, educational sessions and staff meetings there, all in this new virtual space.

But it was … clunky, to put it kindly. It wasn’t a user-friendly experience. It was hard to get started if you didn’t know what you were doing. There were a lot of technology-related issues. The experience of being in that virtual world was lacking. We thought that maybe the technology hadn’t yet caught up with the idea and the potential. “In another decade or two,” we told ourselves, “this could be a game-changing experience.”

So CPA Island faded away, and Second Life did too, although like I said, it’s still around.

And here we are, 15 years later with the metaverse, and I have to tell you: I look at screenshots and demos of some of the things that are going on in the metaverse, and my first thought is, “This looks exactly like Second Life did 15 years ago.” I mean, exactly like Second Life. Where’s the progress? How is this any different from what we were doing 15 years ago? And is it any better than the virtual and remote learning and networking that’s happening via platforms like Zoom or Teams?

So I wanted to find out more about what’s going on. There’s been a ton of press surrounding the metaverse lately, particularly with Mark Zuckerberg’s interest and investment in it. And accounting firms are jumping right back in, just like they did with Second Life back in the day. This is from Accounting Today: “A recent poll from Big Four firm PwC found that 67% of executives are actively engaged in metaverse projects and a further 20% report they are ‘looking into it.’ There seems to be a great deal of optimism around the metaverse as well: The poll found 82% believe it will become “business as usual” either next year or within the next two to three years. This is despite the fact that, according to the poll, only about 9% of respondents currently use any of the existing environments.”

Still, life in the metaverse is relatively quiet. There’s not a lot going on there yet, but those who are there see great potential in areas like client collaboration, business demos of conceptual spaces, and for things like recruiting and training.

We saw all of that potential in Second Life as well, so we’ll have to see where all of this goes from here.

That’s why I’m happy to welcome my guest this week — Glenn Friedman, CEO of Prager Metis. We sat down recently and talked about what Prager Metis is doing in the metaverse the reception they’ve received from clients so far, some of the challenges and opportunities he sees, and what the future looks like in terms of virtual accounting and finance.

Listen to our conversation in its entirety.