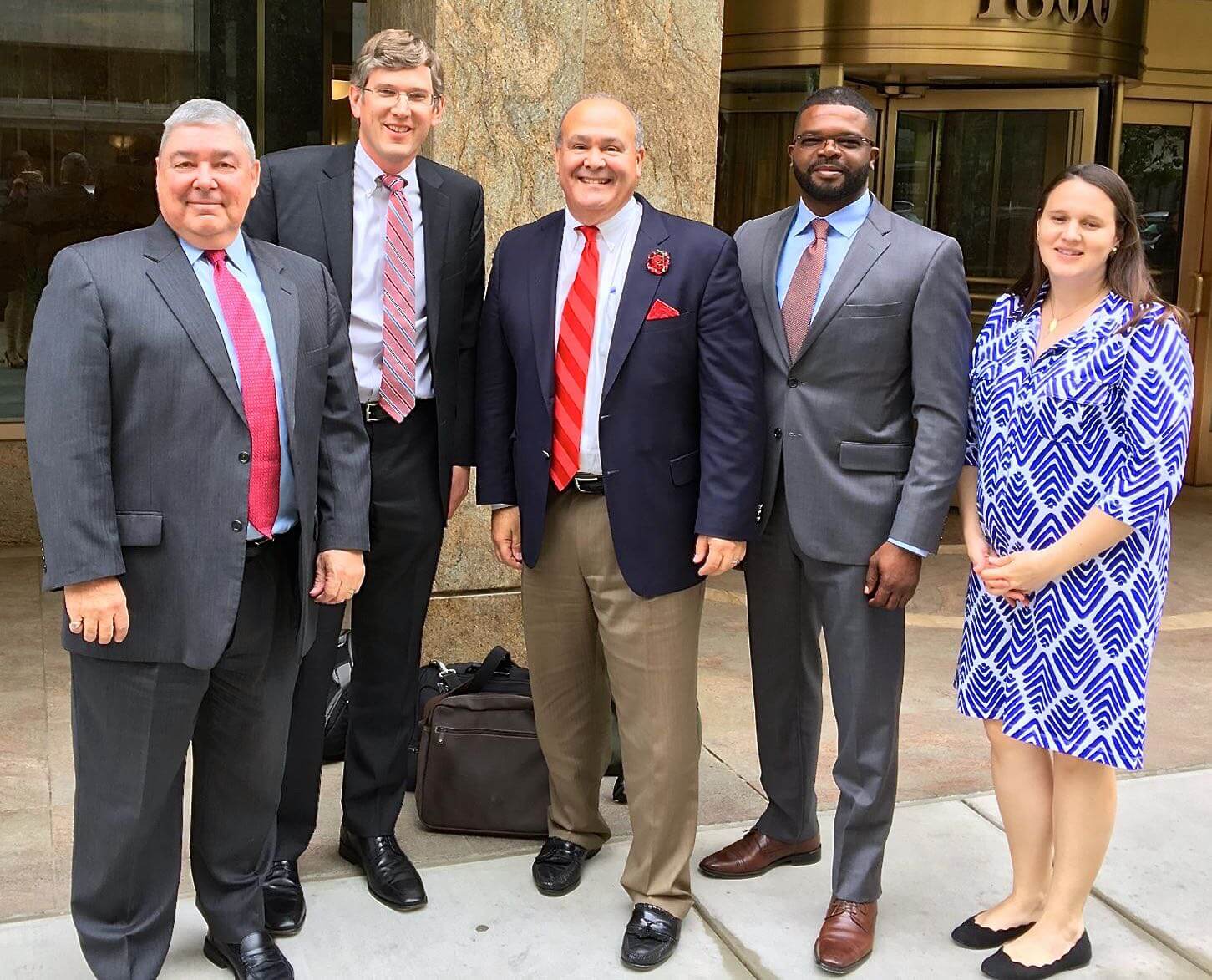 04/28/2016 • by Bill Sheridan
MACPA warns of overtime rule’s unintended consequences
UPDATE: DOL offers ‘token reduction’ in new overtime pay threshold (from the Washington Business Journal) With the Department of Labor hoping to publish its well-intentioned but severely overreaching new overtime rules within the next few weeks, the Maryland Association of CPAs joined the American Institute of CPAs in Washington on April 27 in an 11th-hour … Continued

With the Department of Labor hoping to publish its well-intentioned but severely overreaching new overtime rules within the next few weeks, the Maryland Association of CPAs joined the American Institute of CPAs in Washington on April 27 in an 11th-hour bid to convince officials that the rule is a bad idea.

MACPA Executive Director Tom Hood (center in the photo at left) and Allen DeLeon (far left), founding partner of DeLeon and Stang in Gaithersburg and chair of the MACPA’s Legislative Executive Committee, joined AICPA officials in a meeting at President Obama’s Office of Management and Budget, which is in the final stages of reviewing the overtime rule.

The rule would increase the salary threshold for overtime exemption from $455 per week (or $23,600 per year) to $970 per week ($50,440 per year). Put another way, if the rule takes effect, anyone who makes less than $50,440 per year would be eligible to receive overtime pay. That means an additional 5 million salaried workers could receive overtime pay for any work they do above and beyond 40 hours per week.

Needless to say, America’s businesses are concerned, and the MACPA and AICPA voiced those concerns during their meeting with OMB officials. Among their comments:

The meeting with the OMB is the latest salvo in the MACPA’s opposition to the DOL’s proposed rule. The MACPA wrote its own letter in opposition to the rule, then joined the AICPA’s efforts in a bid to unify the profession’s opposition. In addition, the MACPA signed onto an opposition letter from the American Society of Association Executives and joined the U.S. Chamber of Commerce’s Partnership to Protect Workplace Opportunity, a coalition of “associations, businesses, and other stakeholders representing employers with millions of employees across the country in almost every industry,” which is working diligently to delay the DOL’s proposed rule until enough analysis has taken place to accurately project the impact of the rule.

The overall message is this: There are some good intentions in the DOL’s proposed rule … and an awful lot of unintended consequences. Let’s take a phased-in approach rather than trying to shove this entire rule down the business community’s throat at one time.

Whether the DOL and the OMB will listen remains to be seen.

Regardless, it’s the latest example of the MACPA protecting its members and the profession through coordinated legislative advocacy.